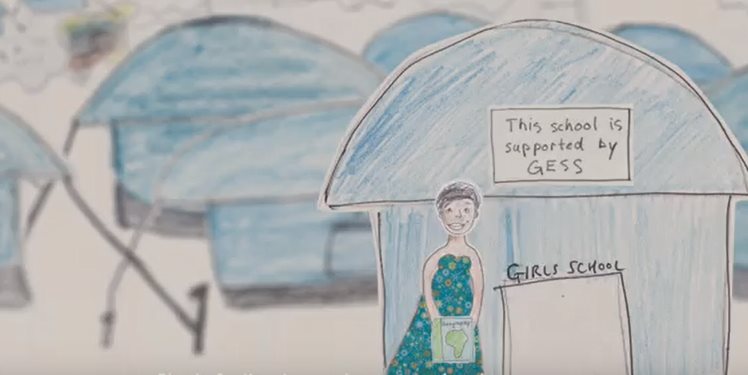 To celebrate International Day of the Girl Child, our Girls Education South Sudan (GESS) programme launched a trio of pioneering films created by South Sudanese girls at screenings in Juba and New York.

The animated films which touch upon themes of displacement, early marriage and early pregnancy, and financial poverty, were created at a seven-day workshop in Juba by girls from Juba, Rumbek, Yambio and the Juba Protection of Civilians (PoC) site. The workshops gave the girls the opportunity to tell their stories through interviews and drawings. The drawings were then brought to life by turning them into moving images with animated characters and scenes. It is the first time that such an approach has been used in South Sudan.

One of the films, ‘Poni’s Journey’, was chosen to be screened in New York at the United Nations event ‘Girls Speak Out’ which showcased powerful, everyday stories from girls around the world.

Poni’s Journey helps raise awareness to the challenges and opportunities girls face before, during, and after crises. The constant conflict in South Sudan continues to impact access to Education, presenting another barrier to girls who already experience negative socio-cultural attitudes towards girls’ education. Only a small number of girls who begin primary education continue to secondary school - in 2016 128,000 girls started primary school but only 2,700 completed secondary school.

GESS Team Leader Akuja de Garang, described the films as ‘expressions of solidarity that we hope will inspire the girls of South Sudan to stand strong in the face of adversity’.

International Day of the Girl Child recognises the world’s 1.1 billion girls who are a powerful source of strength and creativity.

GESS is working nationwide to transform the lives of a generation of children in South Sudan – especially girls – through education. GESS is an initiative of the Ministry of General Education and Instruction of South Sudan, funded by the UK government and managed by Cambridge Education.